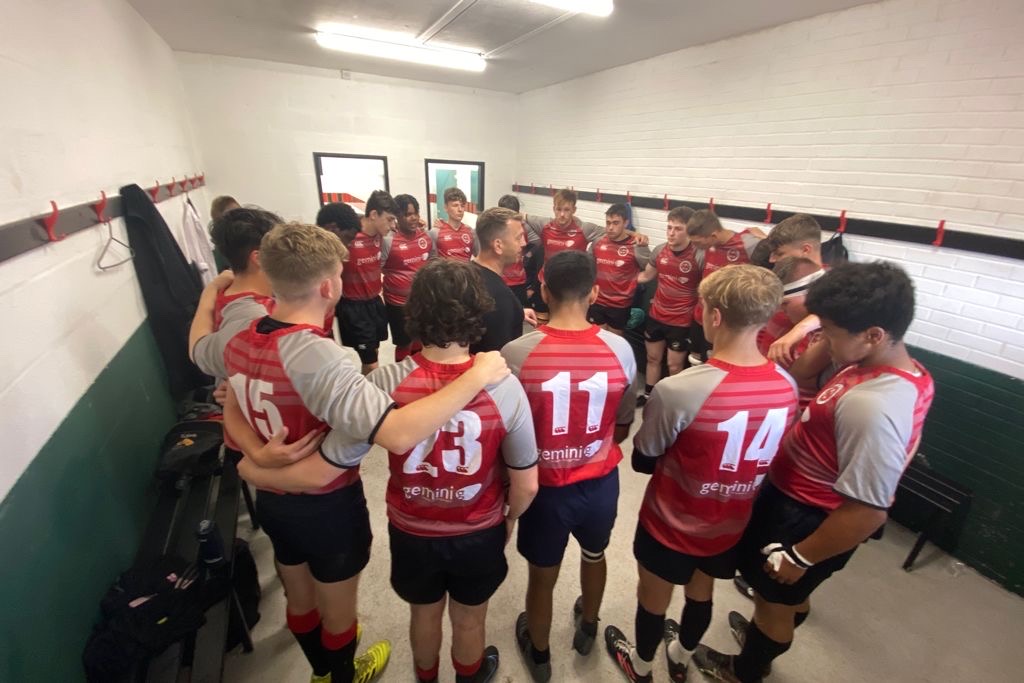 After the euphoria of the opening day victory on the Common, the Colts came back down to earth in Lichfield on Sunday. It was known beforehand that this would be a stern test – Lichfield have a range of academy and indeed international players in their ranks – so it was at least a good chance to measure themselves against a top team. The Moseley side is fundamentally an under 17s team, so if they could keep their heads today, the experience of playing at a high level would stand to them in future. After the heights of summer last week it was back to something more grim this week – or brass monkeys, in the local parlance. 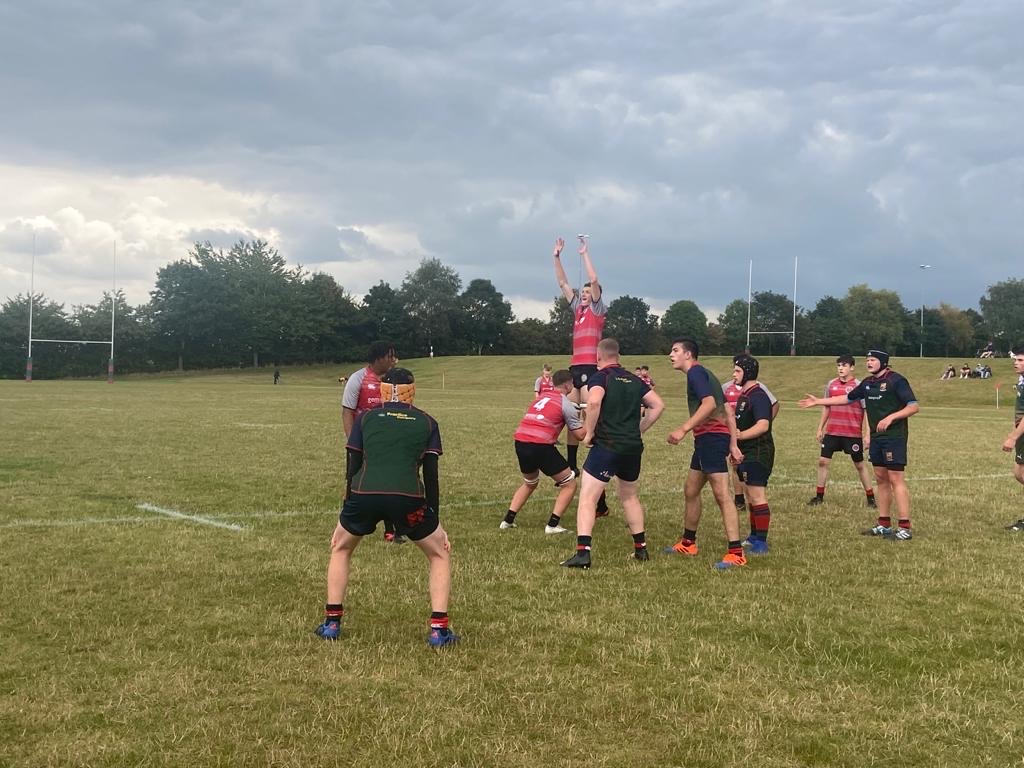 From the off, a number of things became apparent (i) it would be a tough day of tacking for the Colts, (ii) they could expect nothing at all from the ref. The early skirmishes were all exclusively in the Moseley 22, and they would set the pattern of the day – the Js in the front row would not take a backward step; the backrow would tackle everything and the setpieces would be a significant area of dominance. But the backs would never really get the ball in space. Early on, Jago and Jaydon in particular showed great aggression in the ruck, and Sé and Ali would happily knock over any runners in the tight exchanges. And the Mose lineout dominance was especially marked by Sam and Tyler repeatedly stealing Lichfield ball. Although deep in their 22 on the left, Moseley defence, in truth was comfortable and when Sam stole a lineout, tidied by Jacob, it looked like the siege would be lifted, but the ball was turned over and constant pressure on the line eventually saw Lichfield score, with an excellent conversion from the touchline making it 0-7. As is often the case, one score would lead to another. It seemed Moseley was the only side being pinged at the breakdown, and from one such straight after the kickoff, the Colts again found themselves in their own 22. Though they managed to retain the ball, and spin it from Dylan to Efan and then Oli, the rather dubious side entry of the Lichfield scavengers stole the pill, and some excellent handling an a missed tackle saw them double the lead – the conversion again going over from the side. Nonetheless, the aggression and drive were maintained. From the kickoff, Sé buried the receiver on the 22 and Jaydon was swiftly over the ball to jackal. Finally Moseley won a penalty and superb field position. But from the lineout deep in the 22 the promising position was lost with a loose pass, and the ball was cleared. The key moment of the game followed. Wide on the left, Jaydon took the ball and carried hard. But when the ref blew, it was clear there was a problem. Not only Jaydon, but also Jacob, the front row talismen, had to leave the pitch. On came Ethan and Josh for his debut. But multiple positional switches ensued, and the intensity levels dropped. Scrappy play from both side – the backline never really got the ball in space – ended with a Lichfield overlap and an even game on the pitch had become 0-21 on the scoreline. Again, though, Moseley heads did not drop. Repeated infringements seen by the ref (?) put Moseley on the back foot. Superb tackles by Owen, Oli, Efan, Raj, Ali, Jago and Sé in turn halted the tide, and a huge hit by Josh -welcome to the club!- restored equilibrium. But Moseley could not keep the ball, and though Efan found a good touch in defence, a short lineout caught the lads unawares, and it would be 0-26 at the half. 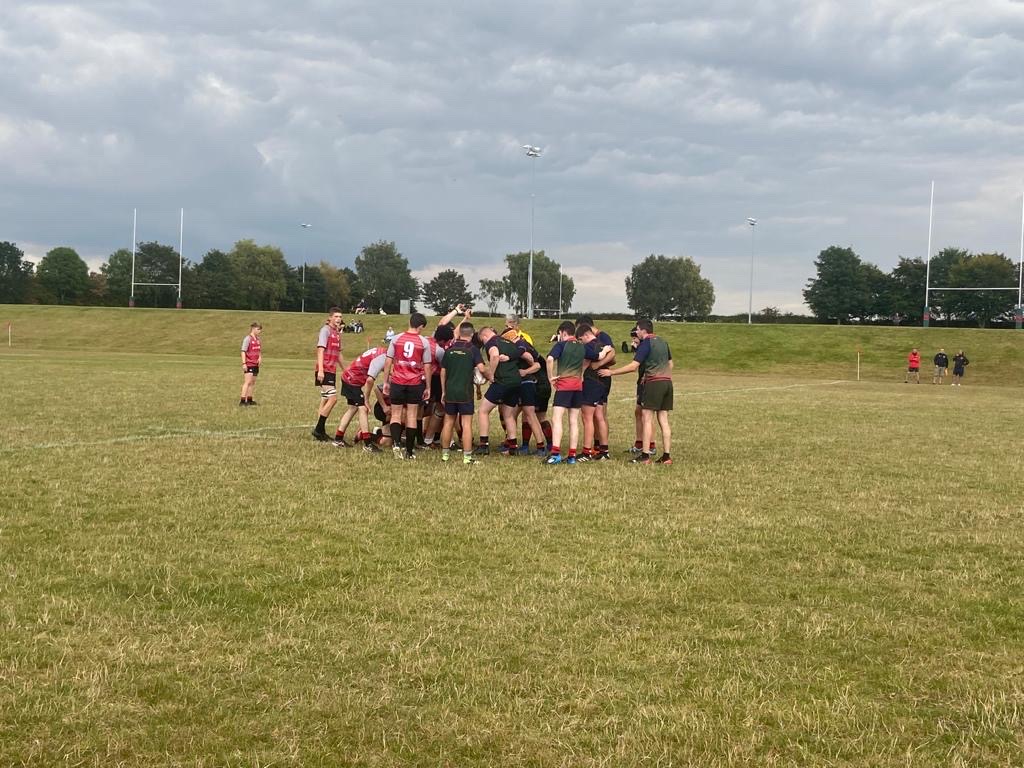 The second half started with Oliver on for Sam. And again, promise was shown early on. Excellent work by Harry, Cian, Raj and Owen saw Moseley advance, and even when the ball was lost, superb counter rucking led by Tyler, Jago and Josh recovered the ball. Moseley could only be halted by infringements, but alas the touchfinder only went to green space, and the superbly athletic Lichfield back went the length of the field. It would be hard to begrudge them the score, even though Ethan and Josh covered superbly, and two fo the passes were a collective 5 metres forward! Deep in the final quarter then, the score was 0-33, and Moseley lost shape a little, not helped by the quirky officiating. It was noticeable though how Ethan in particular would not let his team mates’ heads drop. But at the end, another three scores would be run in, finished off with a fine conversion by former Moseley player Alfie Kingham. The game ended 0-52. 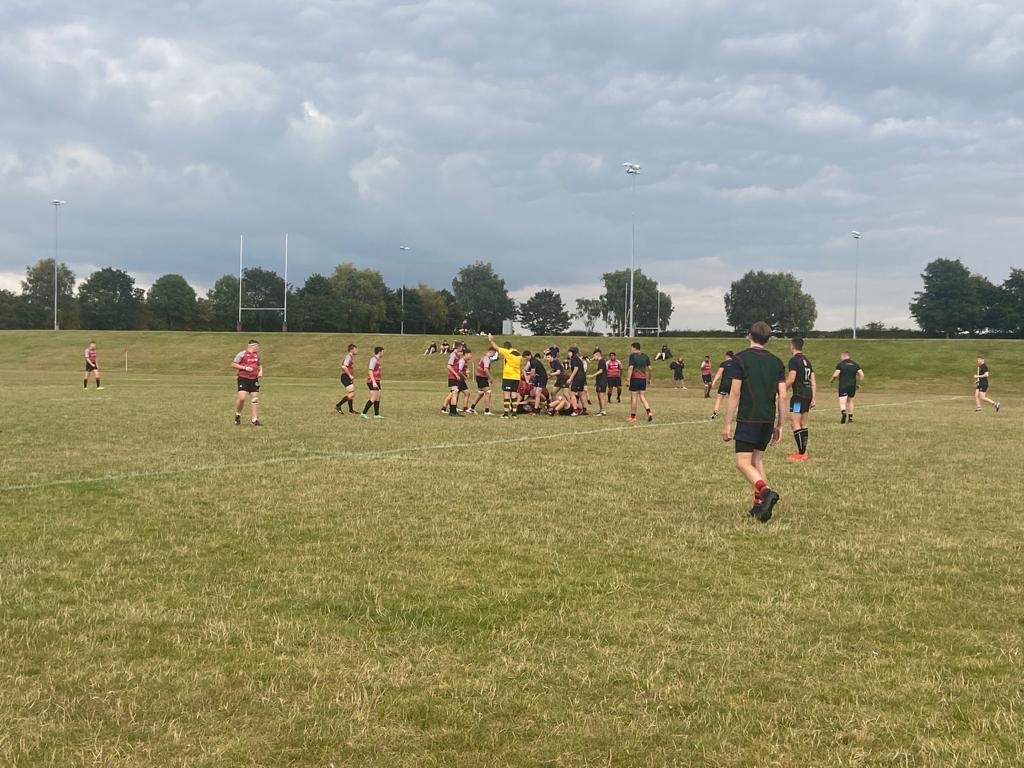 Overall, a chastening scoreline, but there are still positives to be had. Lichfield are the better side at present, but at the beginning, before the injuries and the positional switches, Moseley were well in touch. No doubt a more granular review by the coaches will identify particular work ons – getting the fliers on the wing into space would perhaps be one. But the aggression, tackling and setpieces were excellent. And though the score was not close, there are still sign of promise for the season ahead. 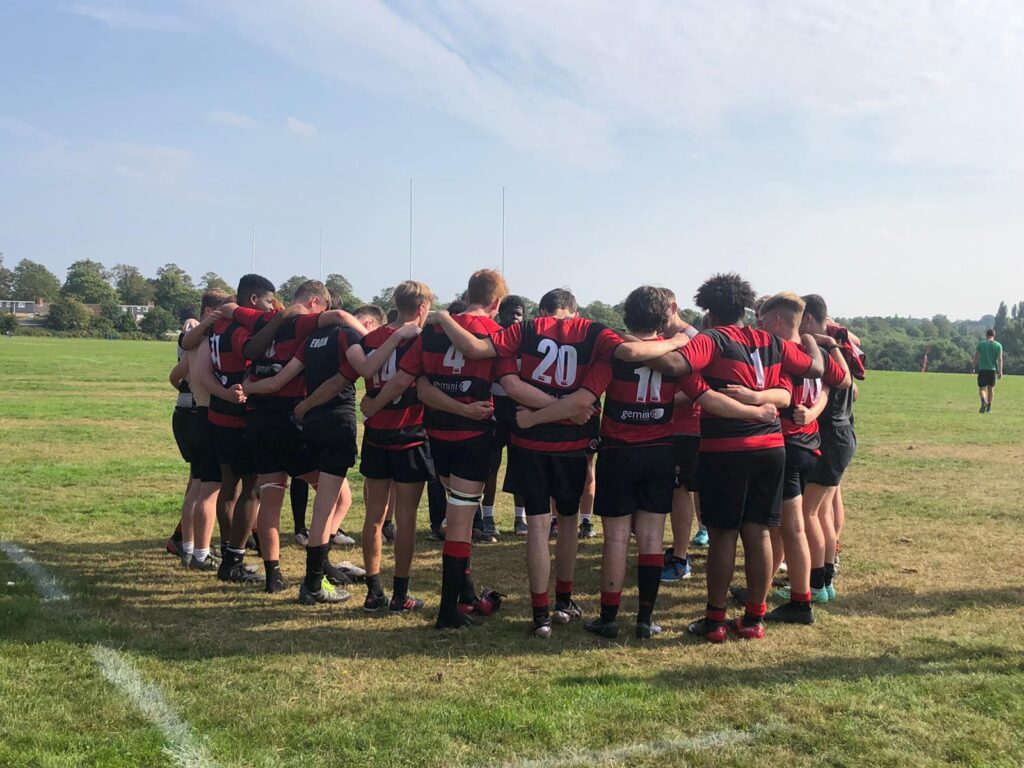 It has been a long time since the end of the Under 15s season was brought to a halt by Covid, and so the Colts lineup looked different to the last time these players took the field. For one, they each seemed about a metre taller and 30 kgs heavier, and in addition the weather on Billesley had more in common with the Sahara than the usual Arctic. It was all with some joy, and no little relief for all concerned, that the first league game of the season against Veseyans could go ahead on the first Sunday in September. 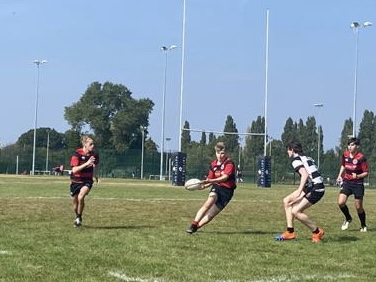 The early stages of the game showed understandable rust on both sides, and the first few minutes were characterised by rather scrappy play between the 10 metre lines. For Moseley, it was noticeable how willing Jago, Harry O, and Tyler in particular were in making short, punchy one out runs. And the benefits of training with the Oak were clear from the excellent communication and organisation of a back line, for whom Harry F was especially vocal. As the game settled into a pattern of hard yards and turnovers, Moseley were dealt a blow when one turnover in the middle of the pitch saw a (suspiciously familiar) mazy runner work his way through traffic, and in a flash Mose were under their own posts with a 0-7 deficit. From the kickoff though, the indefatigable Oli pressured the Vesey receiver and the piano shifters were quickly on hand to effect a turnover; it would not be the last time that Noah and Sam were to the fore on that front. A few phases later, in the middle of the pitch, Owen and Ali set up Dylan to release Efan on the short side. An excellent chip, and a serendipitous bounce into the waiting arms of Harry F were all that were needed: the flyer on the wing burned the cover and opened the Colts’ season account – with that it was 5-7. A pattern of Moseley dominance, but without end product set in. A Sé break led to excellent recycling, but a loose pass saw it come to nothing; a superb Noah jackal set the three quarters free, but the pass went down. Disaster loomed when the Vesey twinkletoes again looked to be on the way through, Oliver held the shape of the defence and Cian lined up an enormous hit to snuff out the danger. By now Raj had come on for the ailing Oliver. But still no final product could be had from Oli and Sé’s half breaks or Harry O’C and Sam’s excellent link ups as Mose were continually pinged at the breakdown, so it remained 5-7 at the break. 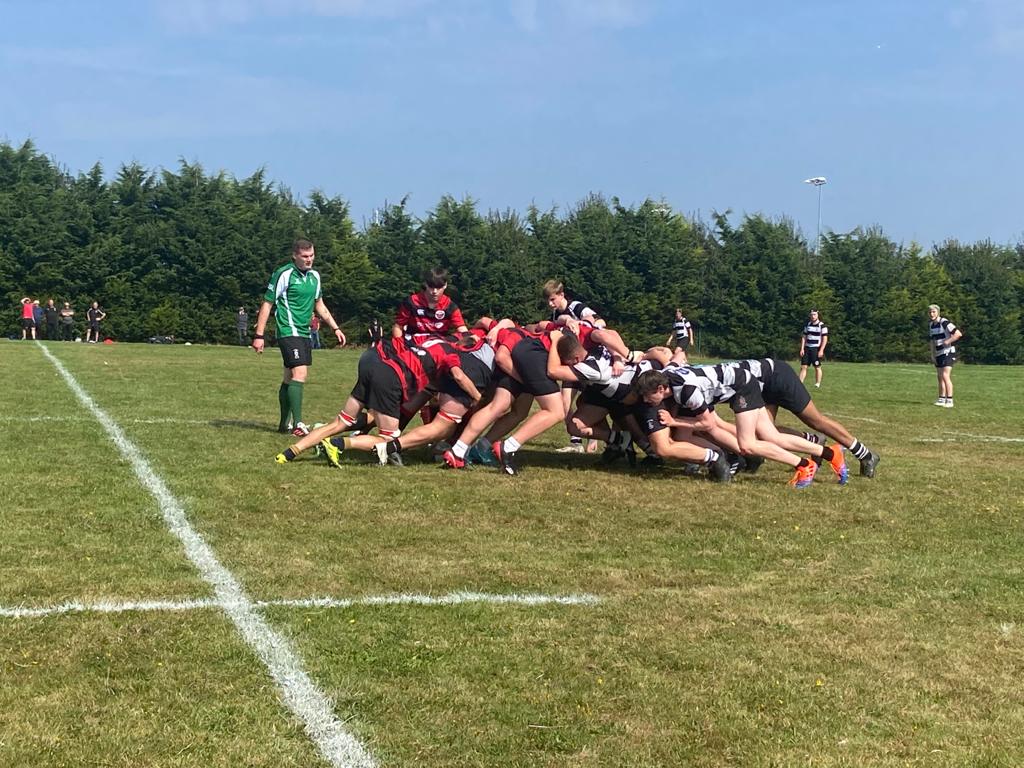 The tide turned significantly after half time, as Sé and Owen swapped places. The game became a bit more feisty as Veseyans reacted to Sam’s aggression by responding in noggly fashion. But the scoreline would soon turn definitively. Jacob and Sé took turns to punch holes in the defence, and the Ali-led pack were on hand to recycle, stopped only by a defensive penalty on the 22. The excellent Efan took a quick tap, went blind and found Oli who delayed his pass just long enough to draw the defence and set the jet-heeled Harry F away. No second chance was needed; Harry plunged over in the corner to make it 10-7. Noah and Jago set the tone from the kick off with big hits, and Dylan was able to release Raj on the left, who showed that pace is all over this team – he chased down his own kick and gave Mose great field position. Harry O and Oli combined from the ensuing lineout to set Harry F clear, but he was hauled down agonisingly short of his hat trick. But Mose would not be long denied, as a superb Noah jackal saw the home side win a penalty. A quick tap by Jacob was all that was needed as the big prop made it 15-7. And this should have increased straight away, as an amazing burst by Harry through the middle of the pitch was quickly recycled from Dylan to Efan and Owen and Harry F claimed his third. Or at least he thought he did, the referee ruling it out for a stud over the dead ball line as he tried to go behind the posts. But the pack would soon see that ball was retained, and Sam made up for the missing points by claiming the bonus point at 20-7. However, any indecision gets punished at this level, and a moment’s lack of concentration from the kick off saw the opposition claim a quick try and, amazingly, make it a one score game. But a Noah and Sé turnover would see Raj free on the wing, and close exchanges would soon see Jacob claim his second of the day. The game was rounded off by the effervescent Harry F who showed a clean pair of heels to the opposition and ensured a more appropriate scoreline of 32-14 at the end. 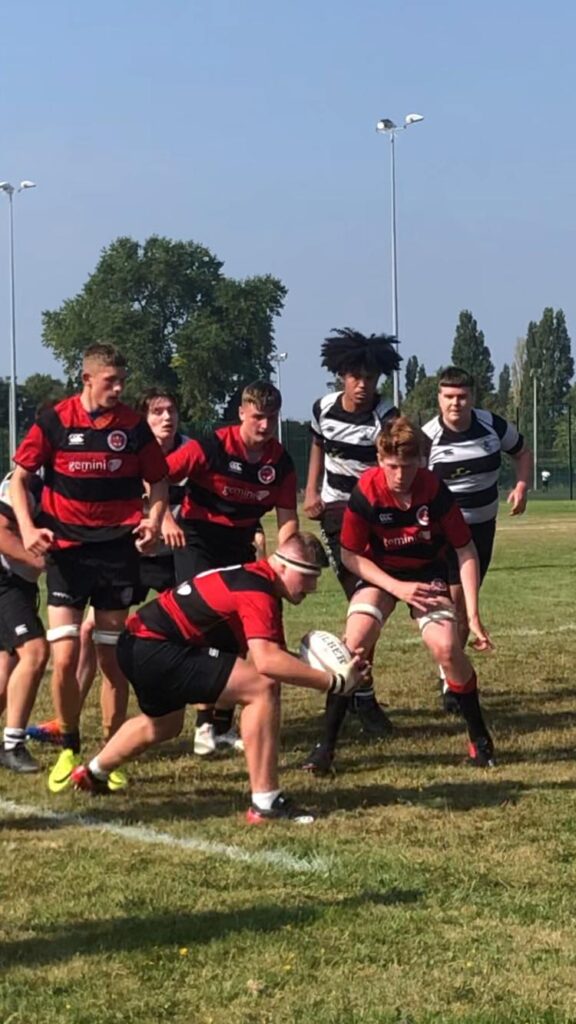 Some rust to be shaken off, no doubt, and more stern challenges than the weakened Veseyans lie ahead, not least the formidable Lichfield and their quota of academy and international players next week. But the communication and organisation were excellent today, the aggression, tackling and general defence play were superb. The months of working with the Oak have clearly paid off. 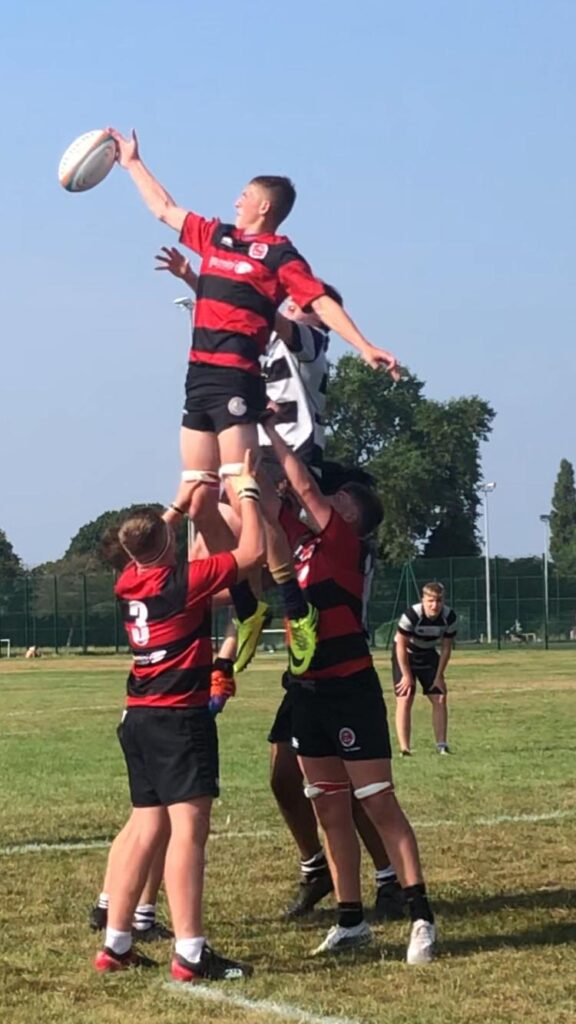